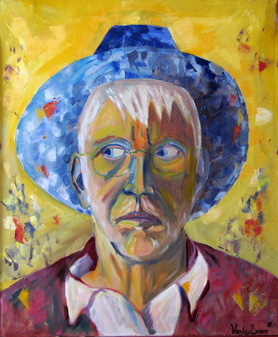 An attempt to a self-portrait.  Official title 'Una persona mal conocida' or 'A person who is little known'. 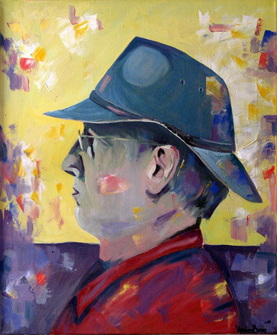 Another self-portrait, but in my view less a success. It is called 'The green hat'. 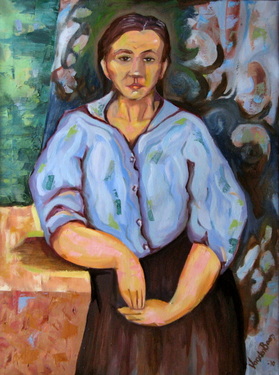 This painting  is called 'Mujer en camisa azul', or 'Women in a blue shirt'. It  is inspired by the painting 'Greta Moll' of 1908 by the famous French artist Henri Matisse.  It has followed mainly the composition and somehow the colours. 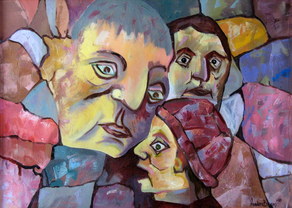 The painting 'Tres cabezas' or 'Three heads'. An experiment that started with some lines, grew to two faces and ended up in this way. 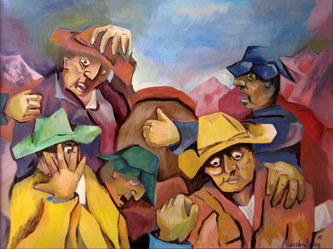 "El paro' or  The strike'.  One of those forms of non-violent protest in Bolivia, very often used to pressure the government or parliament, to influence decision making.

This painting is called 'Wist'Upiku' which is quechua for 'Twisted mouth'. It is funny that there is chain of cafeterias with that name in Bolivia. The main food there is 'empanadas', a kind of cheese pie. It is quite allright although I prefer the 'salteñas', a type of pastry that is filled with a spicy meat-egg-sauce mixture.
This painting was an experiment as I made it in just an hour (while for most others usually many hours are required). 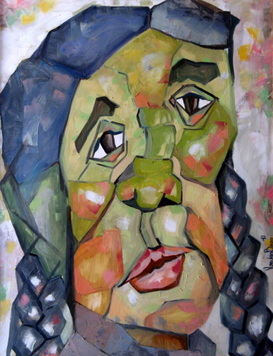 'Woman with tresses' is the simple title. Aymara and quechua women usually have long hair in tresses. The idea is to get a composition in a stylized manner. This painting and the following one were both bought by the Vice Chancellor of the La Paz University UMSA.

By the way, the buyer did a two year master course in Delft on water issues and still is very enthusiastic about Dutch society, culture etc. 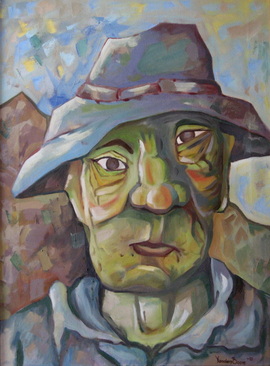 'The man with the blue hat' it is called. As indicated earlier, it got sold together with the 'Woman with tresses'.

Everywhere you will find markets. In La Paz complete quarters are markets, permanently or for one or two days a week. The markets are well organised, with specific parts specialized in vegetables, fish, meat, hard ware etc. 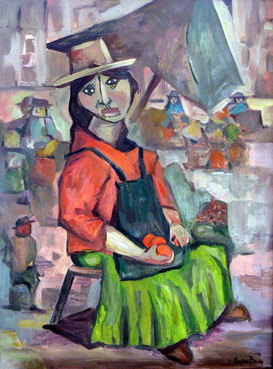 The title is 'Comprame' or 'Please buy from me'. This is the usually greeting by the market women. On the bottom-left side, while painting, suddenly a small red haired woman on the back side appeared. I decided to keep her  although she may look a bit dwarfish.

In reservation for L&F

Alcohol is an important part of various traditional and modern rituals. We were once part of a baptism party, and to our surprise each guest presented him/herself with two crates of beer, one of them got immediately opened. There are lots of legal and illegal bars, and as a consequence, there are lot of problems with intoxication. Which again is one of the causes for considerable domestic violence. 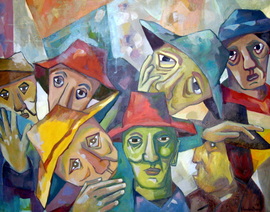 'Los siete borrachos' or 'The seven drunkards'. Just a composition with seven heads and various hands.

In reservation for S&R

One of the most conflictive themes in Bolivian society is land. In the past decades land was allocated for mining, forest exploitation, agriculture etc. without considering already existing titles, or land got occupied illegally. So in many cases various groups or individuals may have claims for the same piece of land. Mind you, we may be talking of parcels of ten thousands of hectares. There is a land reform program running that quite successfully verifies these claims in order to solve these conflicts. And illegally acquired land will revert to the state and is usually re-allocated to small farmers or indigenous groups.
In the past years mostly opposition members were subject of 'reversion', but in March 2011 two members of the ruling party were subjected to reversion, a rather courageous act of the land reform agency. 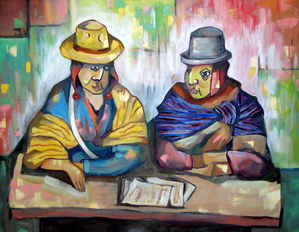 'La entrega de titulos (de tierras)' or 'The  handing over of land titles'. 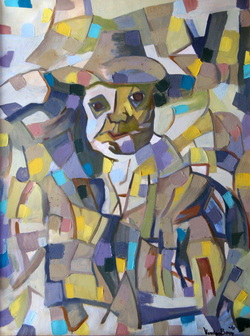 'Face in a composition' 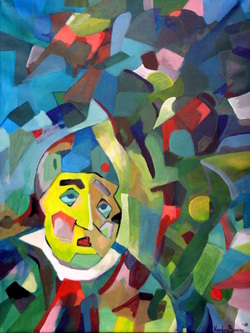 'Pepino in a composition' 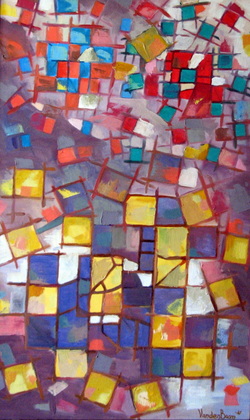 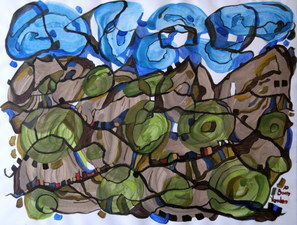 Landscape 'La Llojeta'. It is part of the mountain range on the other side of the Obrajes valley. Well-known because it offers an alternative asphalt road from La Paz to El Alto on the Altiplano (and especially to the international airport!). 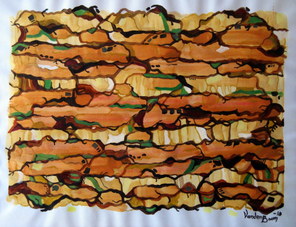 Landscape 'Altiplano', which is rather flat or slightly undulating. In my opinion especially in April a beautiful sight, because of the colourful quinoa on the field, ready to be harvested. 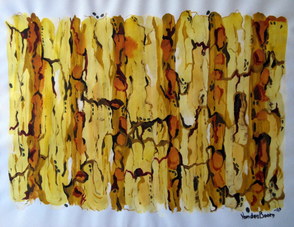 Landscape 'Valle de Animas', or the 'Valley of the Souls'. A beautiful part, just outside of La Paz, on the North East side, on the road to Palca and the Illimani mountain. 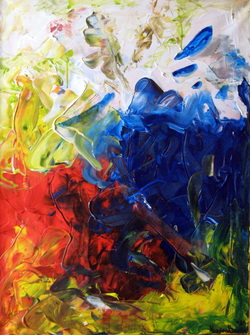 Another experiment, with lots of acrylic paint in the three main colours red-blue-yellow. 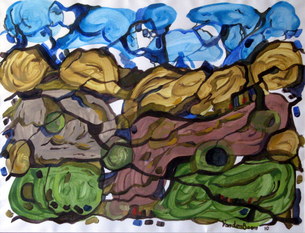 Landscape in blue and brown. 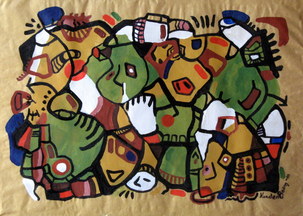